DexMotoCo. is the brainchild of two friends and motorcycle enthusiasts from different parts of the world, united by a dedication to going above and beyond what is required, design, and the preservation (and reinvention) of motor vehicles. 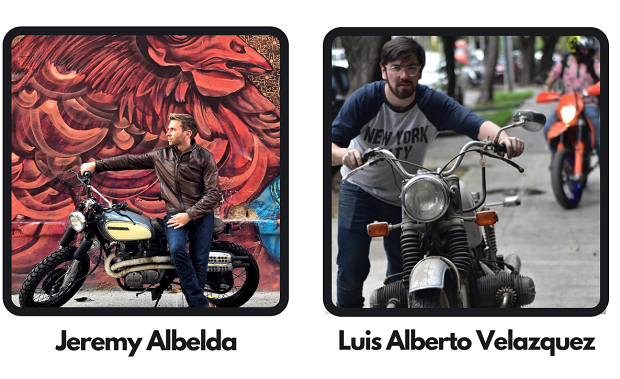 Master Mechanic and Lead Builder, Luis Alberto Velazquez, is proudly Mexican and has had a love for all things gasoline powered since he could barely speak (sometimes we wish he never learned how to!). Both his grandfather and father were both big gear heads (both 2 and 4 wheeled), and they instilled a passion for motor sports for Beto early on.

Beto knew from a young age that mechanics were his calling. Fast forward 10 years, and Beto has earned a degree in automotive and motorcycle engineering and has worked in countless shops, including a 6 month stint where KTM poached him to work in New Orleans as a lead mechanic in one of their busiest stores.

Beto now runs two of his own shops which focus on routine motorcycle maintenance, restoration of classic motorcycles, as well as the creation of the sexiest custom motorcycles in the hemisphere.

Jeremy hails from the other side of the Rio Grande and moved full-time to Mexico in 2015. He has gotten around (in a good way), and decided that Mexico was the place that offered the best of all worlds and he decided to put down roots in his adopted home Mexico, happily.

Along with an insatiable love of motorcycles, Jeremy’s background is rooted in digital marketing, creative, and business development. In Mexico City, he is a partner in 3 restaurants and the creation of Dex Moto Co. was the perfect melding of all of his passions; bikes, customer service, creative, and design.

Jeremy is also a Travel Writer and has been featured in major publications like National Geographic. He also acts and has been in some feature films and conducts interviews internationally on camera.

Begin typing your search term above and press enter to search. Press ESC to cancel.